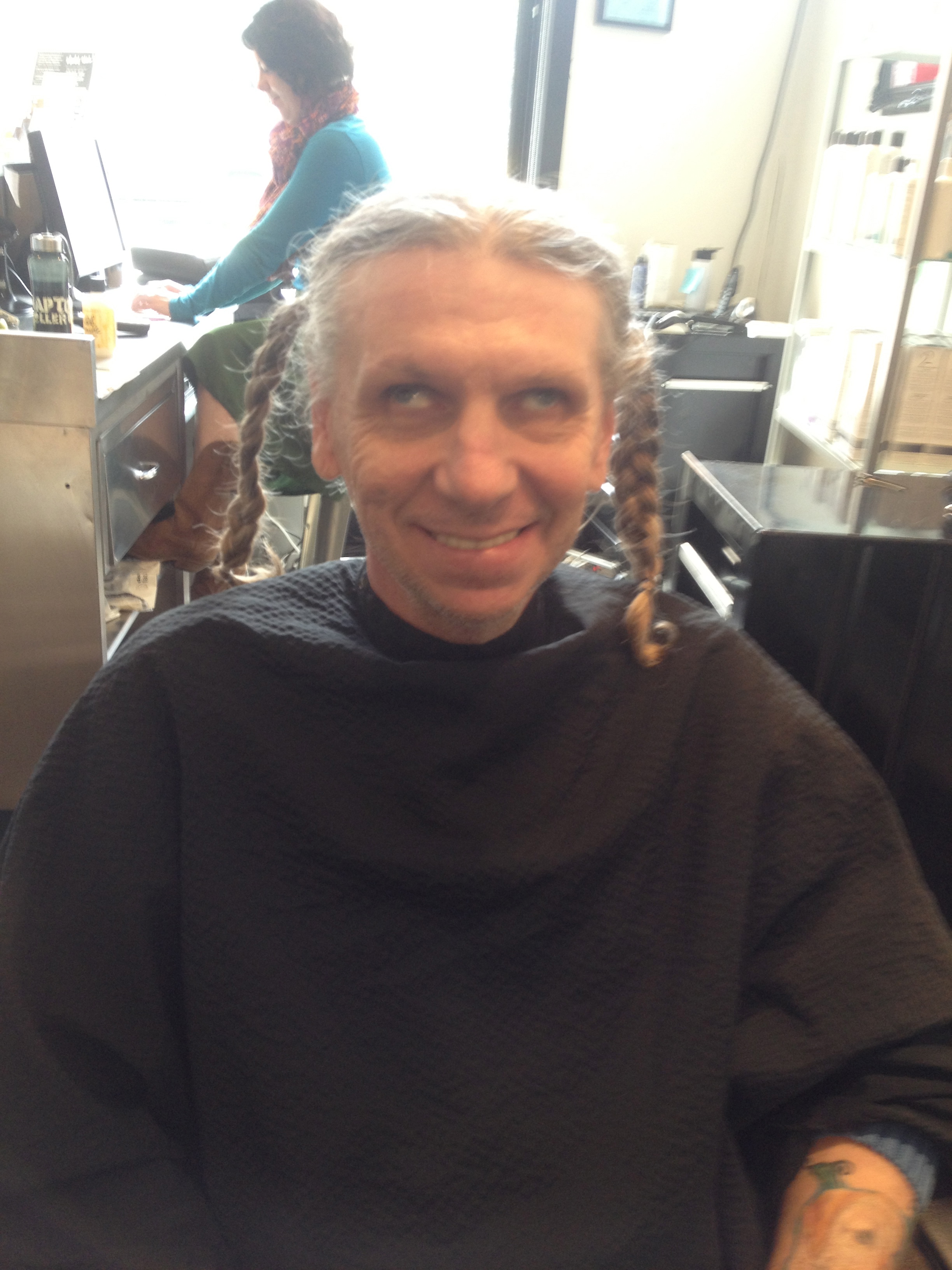 It’s been a long time since I last wrote a random musings article. In fact, I haven’t written anything like this since the BlindConfidential days. Lots of things cross my mind that may be interesting or amusing to our readers so I will write them down here and hope you people enjoy them.

Last year, Mia Lipner,, my best friend had a rare cancer (leiomyosarcoma) possibly linked to the Retinoblastoma that caused her to lose her vision as a child. While visiting her at a UCSF hospital in San Francisco, I had a conversation with a young woman working as a cancer navigator there. She noticed that I had relatively long hair then and suggested that I grow it out and donate it to Locks of Love, an organization that collects human hair and makes wigs for underprivileged children who’ve lost their hair to cancer. Growing my hair out cost nothing and, hopefully, some kid got a nice wig to wear while she is going through chemo therapy.

If you have long hair and want to get rid of it, I recommend sending it to Locks of Love. It’s really easy. I went to a hair salon on Haight St. in San Francisco, the stylist to whom I was assigned put my hair into three separate braids and cut them off as close to my head as possible. She said it was nice to have a man with long hair come in as she could cut it really short and the kids get more hair for their wigs than they would if I had chosen to keep it longer than I did.

I’m happy to have helped in my little way and suggest that if you want a really easy way to help kids with cancer, you do the same as growing one’s hair long is a really easy and very inexpensive way to help out.

A Nexus/7 at BestBuy

The other day, I went to BestBuy to look at and possibly buy a Google Nexus/7 tablet. I wanted to have an Android device in my hands just for the sake of being able to test its claims of accessibility for people with vision impairment. Unfortunately, when I asked the salesman if he could turn on TalkBack (the Android screen reader), I was informed that such was impossible when the unit is in “demo mode.” When I got home, I double checked to make sure it wasn’t a mistake made by the kid selling mobile devices at a retail store and learned, indeed, Android devices in demo mode cannot be used by a person with a vision impairment. Meanwhile, Apple devices in the same section at the same store allow users to turn its screen reader on and off.

This is exactly what I’m referring to when I describe iOS as the only truly accessible devices available on the market. It is also to what I’m referring to when I say that Google’s hubris, Google deciding what we blind people do want or need, they control the OS, the accessibility API, the engineering teams, everything but refuse to make their demo talk (something that would be included in the design if they cared about accessibility) while also refusing to make accessible 100% of the apps shipped by default in Android from Google.

A few weeks ago, another blind iOS user suggested that I may enjoy a game called Shredder Chess. I’m not a good chess player, I know the rules but that’s about it. I must say, though, that this app is 100% accessible and I’ve been enjoying it for a few weeks now. You can get it from the iOS AppStore where there is a no cost, “light” version and the full game is available for eight dollars. I paid for my copy as I’ll pay up to $10 for almost any accessible mainstream app just to thank the developers for making the effort of making their product accessible.

By the way, does anyone know of a accessible way to learn chess basics? There are some chess tutorial programs for iPHone but I’ve no idea which may be usable with VoiceOver.

I listen to baseball on the radio a lot. Tropicana orange juice ads on Tampa Bay Rays games say, “Picking an orange is just like throwing a baseball…” I ask, “Then, why do migrant orange pickers make so much less than baseball players?”

I really enjoy listening to the disclaimers at the end of commercials for pharmaceuticals. They tend to sound like a long list of the worst things that can possibly happen to someone. They usually sound far worse than the symptoms they are trying to cure. Meanwhile, supplements, most of which are made by the same big drug companies, “big pharma” if you like, don’t even need to publish the levels of active ingredients or test results regarding the nonsense they sell. Go figure.

Last week, Shelley Segal performed at my home in St. Petersburg, Florida. I advertised the event mostly on MeetUp.com on atheist, humanist, skeptical and other local groups. I had never met any of the people who attended other than Shelley herself.

Shelley turned her concert into a conversation with the attendees. Shelley made certain that she had spoken to each guest and, far more so than just chatting with people, Shelley made everyone in the room feel very special. Shelley’s generosity of spirit is amazing and, if you don’t know this awesome gal, seek her out as she’s such an amazing friend to have.

As ever, I’m uncertain what the future may hold for people with vision impairment. I can say that I’m working on some really interesting things. Keep reading this blog as we’ll be announcing some really cool things here in the near term future.

Chris Hofstader has been knocking around the world of blindness for more than two decades. He was VP/Software Engineering at Freedom Scientific for six years ending in late 2004. He has since worked as a contractor on a lot of projects but is most well known for writing this blog and the one called BlindConfidential before it. Chris splits his time between St. Petersburg, Florida and Cambridge, Massachusetts. Chris tends to write about issues related to blindness and technology but he'll also write about mental health, rock and roll, books he's read, fishing, baseball or any of his other myriad interests. Chris also writes some fiction here too.

This site uses Akismet to reduce spam. Learn how your comment data is processed.